Meet the Rhino 3, developed over nearly 15 years of part-time trials and errors, mostly by Mike Balogh and a small group of friends and ultralight enthusiasts from New York. It’s the third (and not necessarily final) version of what we consider to be the ultimate ultralight. Ask Mike, and he’ll tell you that, if you boil down all the flying basics to their lowest common denominator and incorporate all that’s been out there since the beginning, the Rhino 3 is what you’ll end up with. In true EAA spirit, the original Rhino was born out of an EAA chap ter project back in 1995. Chapter 474, based at Kobelt Airport (N45) in Wallkill, New York, was like most chapters: a close-knit, like-minded group of innovative and talented guys looking for a challenge. One day, a prospective member—that’d be Mike—walked through the door and joined the conversation, which eventually gravitated toward scratch building a cheap, simple, and rugged ultralight (hence the name “Rhino”), And not one, but 15. The guys all wondered if he was kidding, but Mike figured why not. It’s practically what he does: build stuff for a living, particularly custom machinery for industry, factory production machines, prototypes, and other one-off stuff. Fixtures and tool making were his forte.

After some discussion, 15 members agreed to team up to buy all the raw materials. They’d work together, allocating duties according to each man’s talents and abilities. The airplanes would be manufactured mass production style. The group would build 15 of each component, .and when all the components were completed, each individual would personalize his own airplane. The clubhouse buzzed with activity every work session. On any given day, they’d build 15 rudders, or 15 stabilizers, or 15 of whatever. It was a sight. When the group decided which component they needed next, Mike would show up the next day with a new fixture to make that part, like magic. After the success of the Rhino 1, Mike got the bug to go into production and take the Rhino to the flying public. The Rhino 2, with a total back-to-the-drawing-board approach, was set to go great guns—with investors and everything—until 9/11. Mike had to shelve the project and sold the prototype to a friend. It’s still flyable today. Mike shamelessly admits that the Rhino 1 was a rip-off design, loosely based on the Flight Star/Phantom, with a few unique features. The Rhino 2 was a quantum leap forward from that, and the Rhino 3 is another giant step. It shares the 2’s innovative, tamped, undercambered aluminum ribs that hang on standard tubular spars, but the 3’s wing replaced the 2’s torque-tube actuated ailerons with simple and reliable tele-flex cables and added Hoener-style wingtips. He’s picked a tried-and-true Kawasaki 440 engine for the airplane, too. 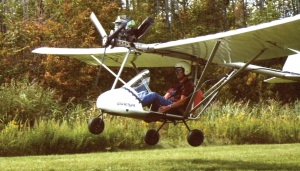 The project is moving along quickly; after a cash infusion from the newest member of our small group, George K., we’ve made good progress since the summer. Recently, George helped Mike Fithian, who is known worldwide as official support for the Falcon ultralight/light-sport line of aircraft (www.AeroFalcon.com), skillfully cover the wings, ailerons, and tail feathers. We were hoping for a first flight by mid-September, but since we all have real jobs, it hasn’t happened. Yet. We don’t want to give up all our secrets and innovations, but we’ve got nearly 90 percent of our production fixtures and tooling completed. The Rhino 3 prototype was built using those fixtures, and only about 10 percent of it is one-off construction. We’re excited about introducing the Rhino 3 to the worldwide ultralight community soon. We welcome your comments and inquiries (imnav8or@verizon.net or info@campredwood.net), and we’ll make every effort to respond. If all goes well, we’ll be able to attend the Sun ‘n Fun Fly-In at Lakeland, Florida, in April 2010, and we’d like to go into production sometime next year. Stay tuned. If you’re interested in learning more about ultralights and light planes, then you may want to sign up for EAA’s newest electronic newsletter, Light Plane World.
Sign up for this additional member benefit at www.EA4.org/neivs/ertefs.

You can find this article and more in the latest issue of Boating on the Hudson Magazine! Pick up a FREE copy at your local Marina or favorite waterfront location. Not sure where you can pick up a copy? Not close to the Hudson River? Want to have the magazine delivered right to your door? Feel free to email us, vargojhvargo@aol.com or visit our website www.boatingonthehudson.com and view our magazine online!