Space Shuttle Enterprise is coming to the Hudson River!

In July 2011, NASA flew its last shuttle flight and has since been preparing their spaceships for their final mission to become museum displays in Los Angeles, Washington DC and New York City.  Earlier this morning the Space Shuttle Discovery left Kennedy Space Center in Florida piggy backing on top of a modified Boeing 747 jumbo jet, headed for Dulles International Airport outside of Washington, D.C near the Steven F. Udvar-Hazy Center of the Smithsonian’s National Air and Space Museum. For years, the museum,  has held the Space Shuttle Enterprise — a prototype shuttle that never flew in space. The Enterprise will be exchanged for the Discovery and the Enterprise will take it’s turn on a jumbo jet and head to NYC. 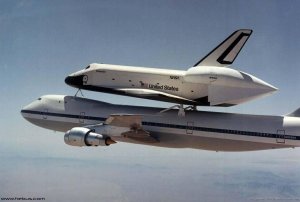 The Enterprise is expected to do a fly over of the Statue of Liberty and it’s new home, the Intrepid Sea, Air and Space Museum, next week before landing at John F. Kennedy International Airport.  The FAA (Federal Aviation Administration) has scheduled the fly over of the Enterprise for Monday, April 23rd between 9:30 and 11:30 in the morning.  The scheduling of everything will of course be dependent upon the weather conditions for both Discovery and Enterprise “missions”.

The Enterprise’s final leg of it’s journey is expected to be in June (depending upon the tides and weather conditions) aboard a barge and travel up the Hudson River to the Intrepid Museum, on Pier 86 on the west side of Manhattan.  It is reported that the Enterprise will not be covered or shrink-wrapped for it’s boat ride up the Hudson and is sure to be a historic sight to see!

Here are some links for more information about the Space Shuttle Retirement Program, the Enterprise and their journey;

6 thoughts on “Space Shuttle Enterprise is coming to the Hudson River!”